We will start our walk along the Bosphorus walls at the ruins of the Bucoleon Palace (Bukoleon Sarayı). Getting here from the Hippodrome square is very simple: you need to go around to the left Marmara University and walk a couple of blocks down Aksakal street. 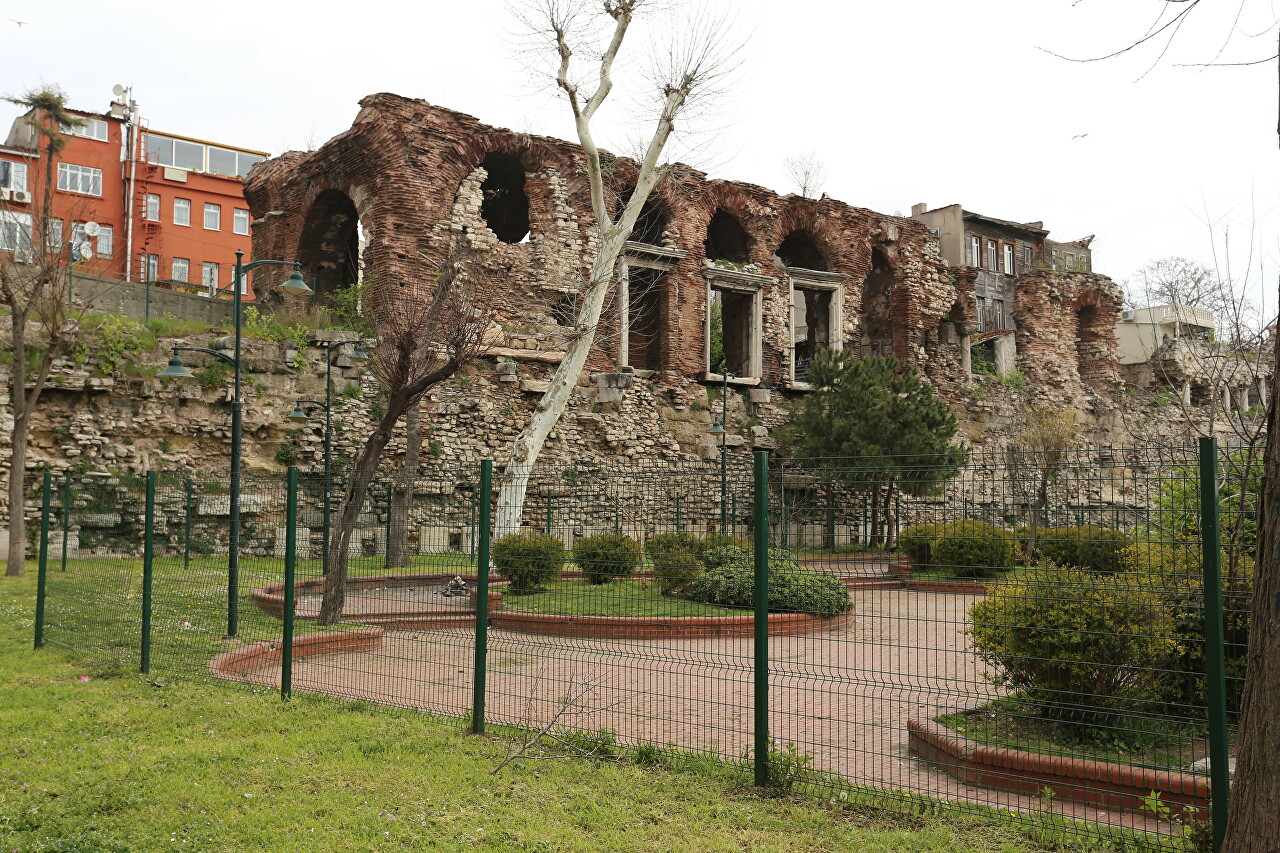 After passing through the tunnel under the railway tracks, we will find ourselves on the Kennedy embankment, turn left and go along the Seaside wall, built in the first half of the 5th century. After about fifty meters, you can see the so-called "Cracked gate" (Catladi Kapi), here was the main entrance to the Grand Palace, later laid. Opposite the gate was the Imperial Harbor, where steps led. In our time, this may seem strange, since now the water is more than a hundred meters away. Now the staircase is buried under sediments, and the sea shore has moved away as a result of artificial expansion of the embankmen. 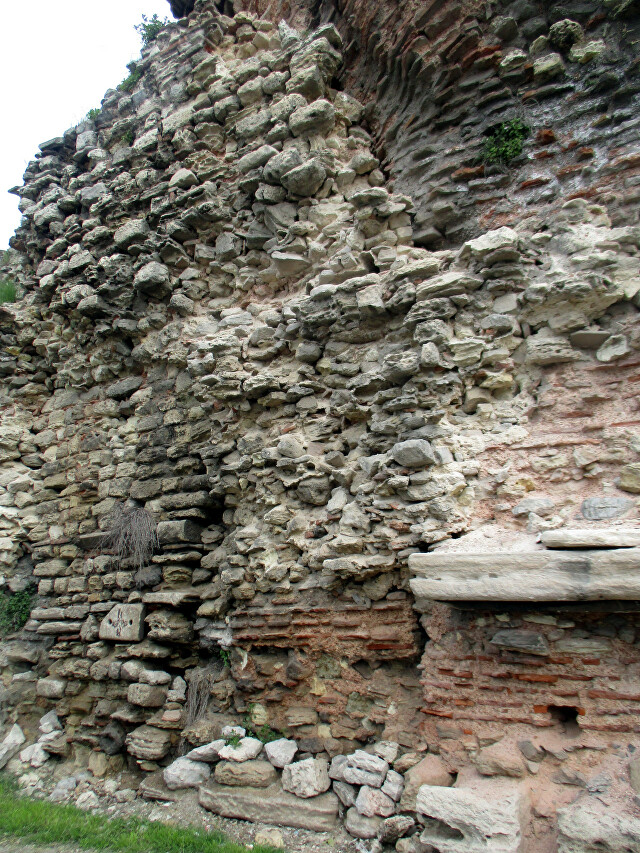 Further to the east we will see a break in the wall and a corner tower with crenellations. This structure belongs to the era of Justinian II. Behind the walls are the remains of a wide staircase that connected the floors of the Palace. 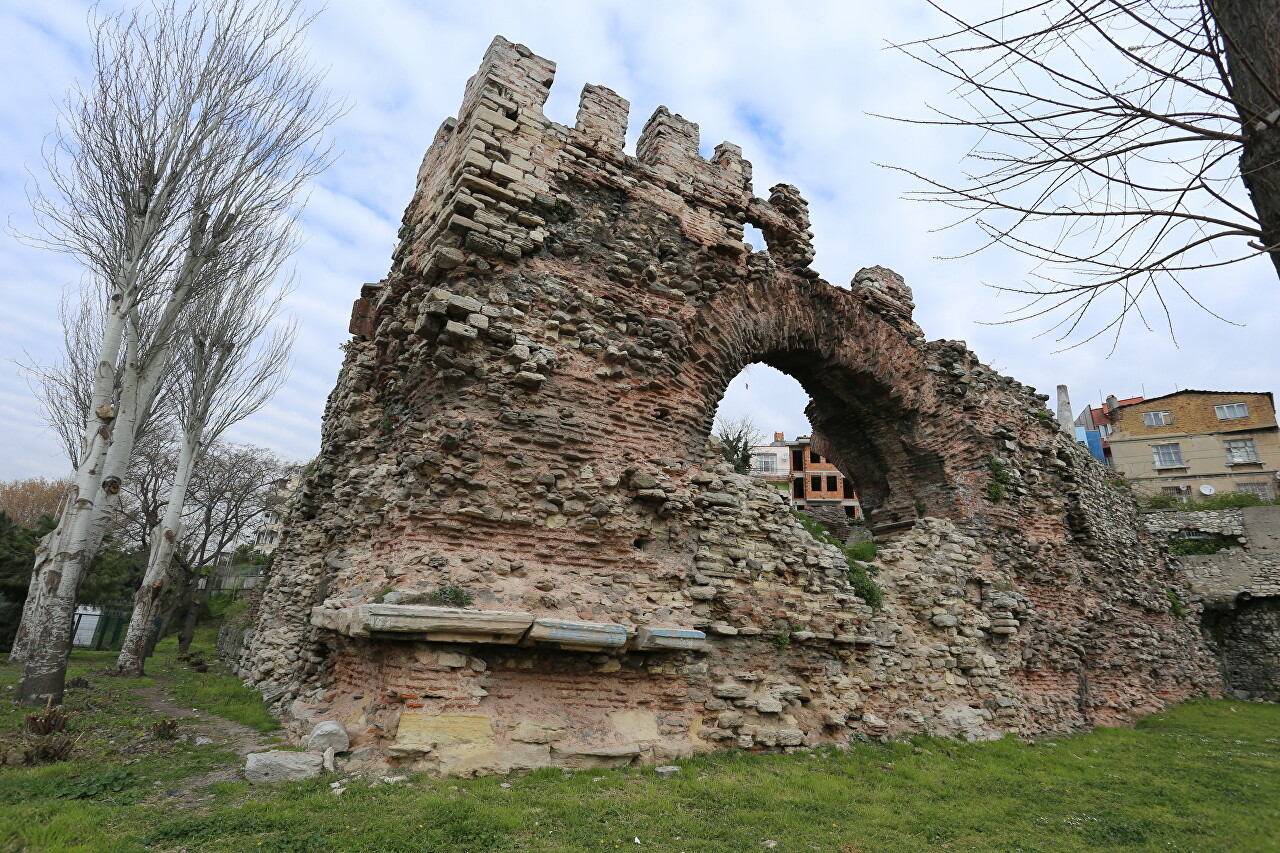 Now the staircase and the lower floor are covered with a "cultural layer". in the right wall of the tower, you can see a large arched opening, behind which there was a hall called "Blues Fala". "Fiala" - a bowl, or a box, "Blue" - a fans party of the team that performed at the Hippodrom. As now, each team had its own color, this tradition came to Byzantium from Rome. As you can see, Justinian II was a passionate fan of the "Blue" and the hall was intended for meetings of fans of this "club". 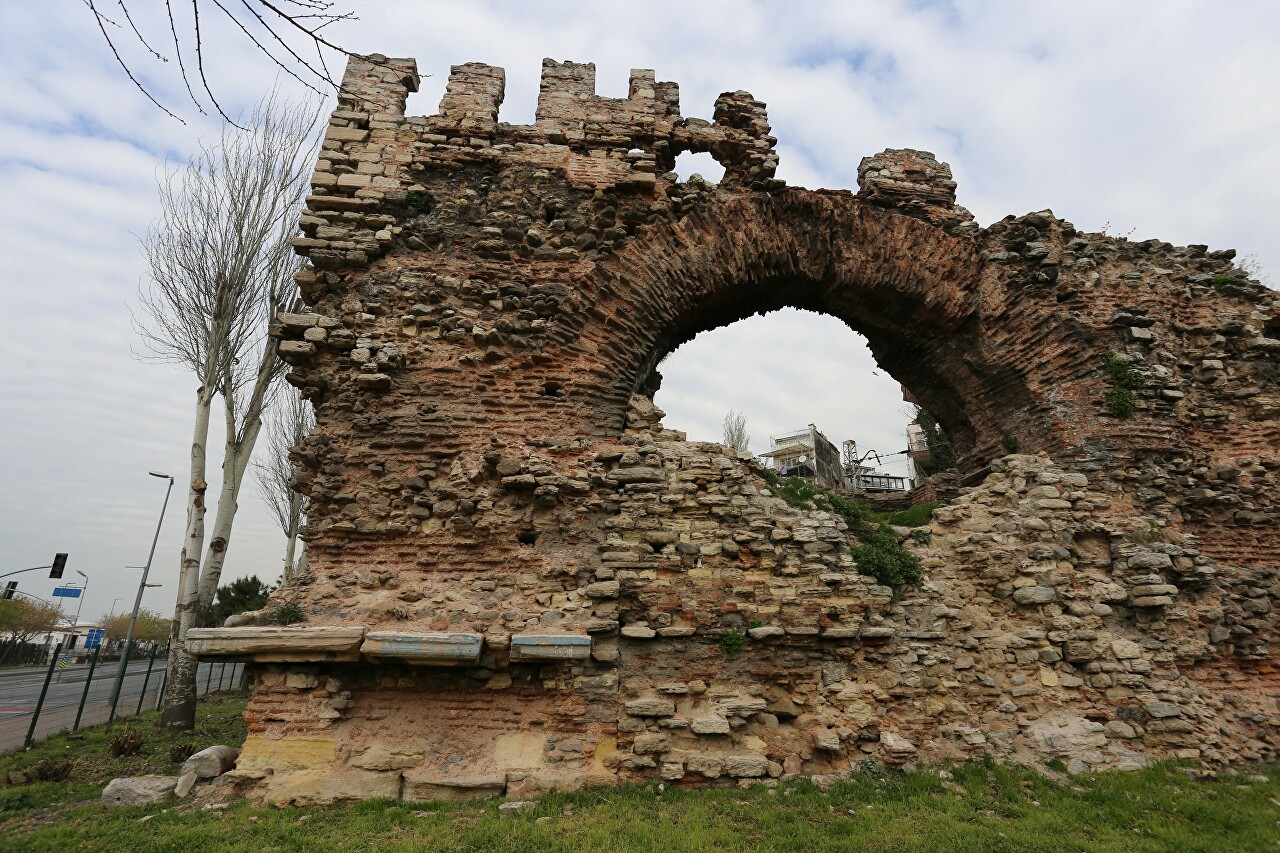 Around the corner of the "Blue Lodge" opens a building called In most guidebooks "bucolon Palace" or "Vukoleon". In fact, this is the seaside part of the Grand Palace and is actually the only thing that gives an idea of its greatness. 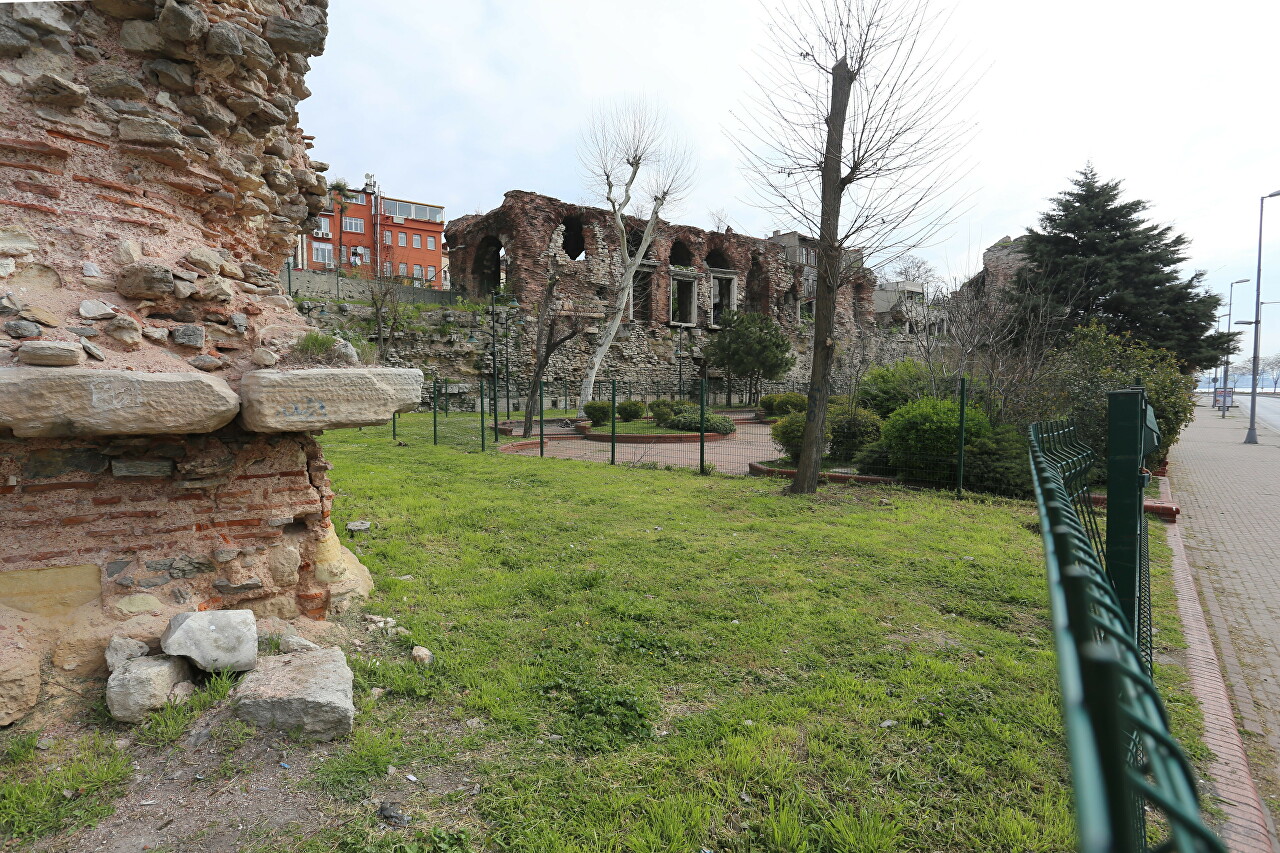 Unlike most buildings of the Grand Palace, the ensemble of Bucoleon has gone through many eras, a well-preserved until the 19th century. However, it did not resist the onslaught of the industrial revolution. in 1871, most of it was demolished during the construction of the railway. 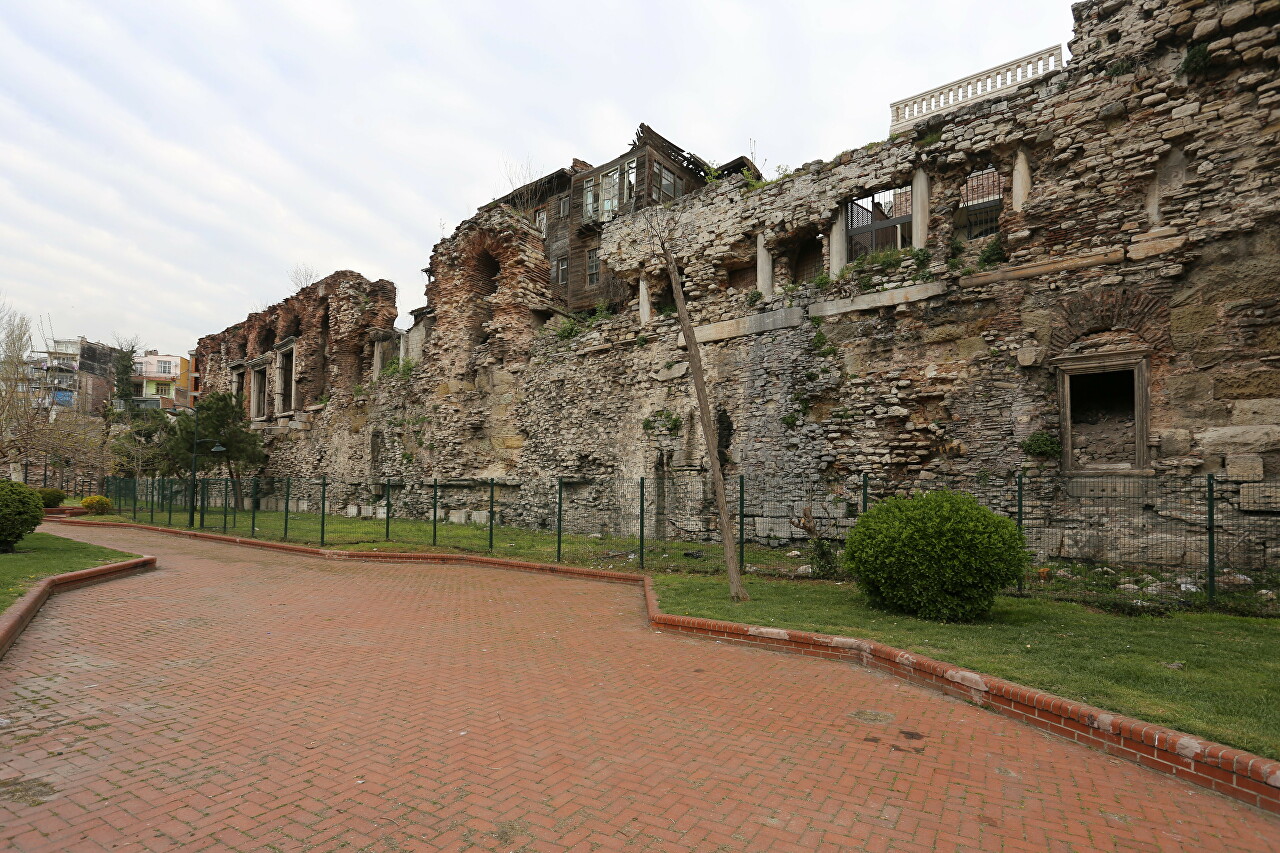 On the facade, first of all, white window frames, almost untouched by time, attract attention. Under the frames, stone beams protrude from the wall, on which the balcony slabs were laid. 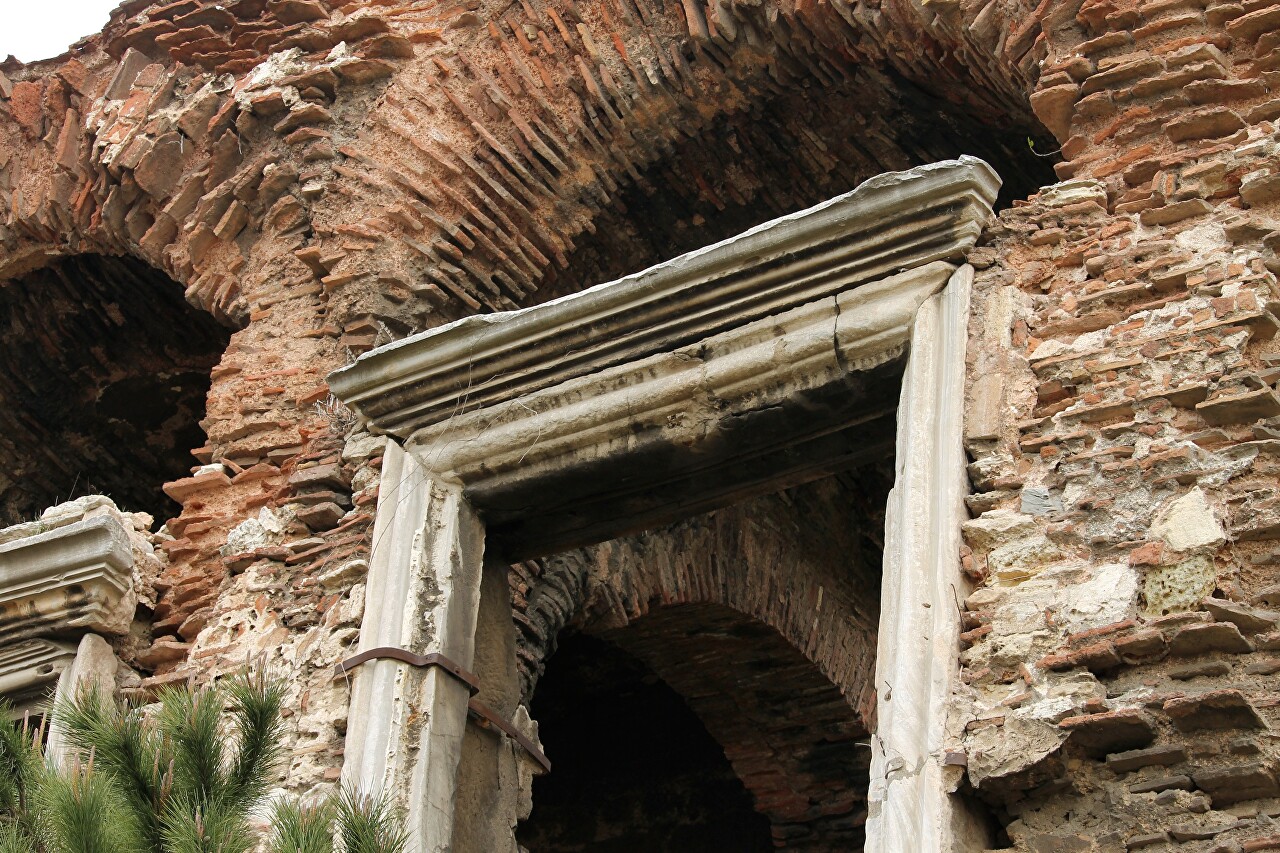 To the right of the windows is a long colonnade, in this place were the Palace baths, built by Basil I. 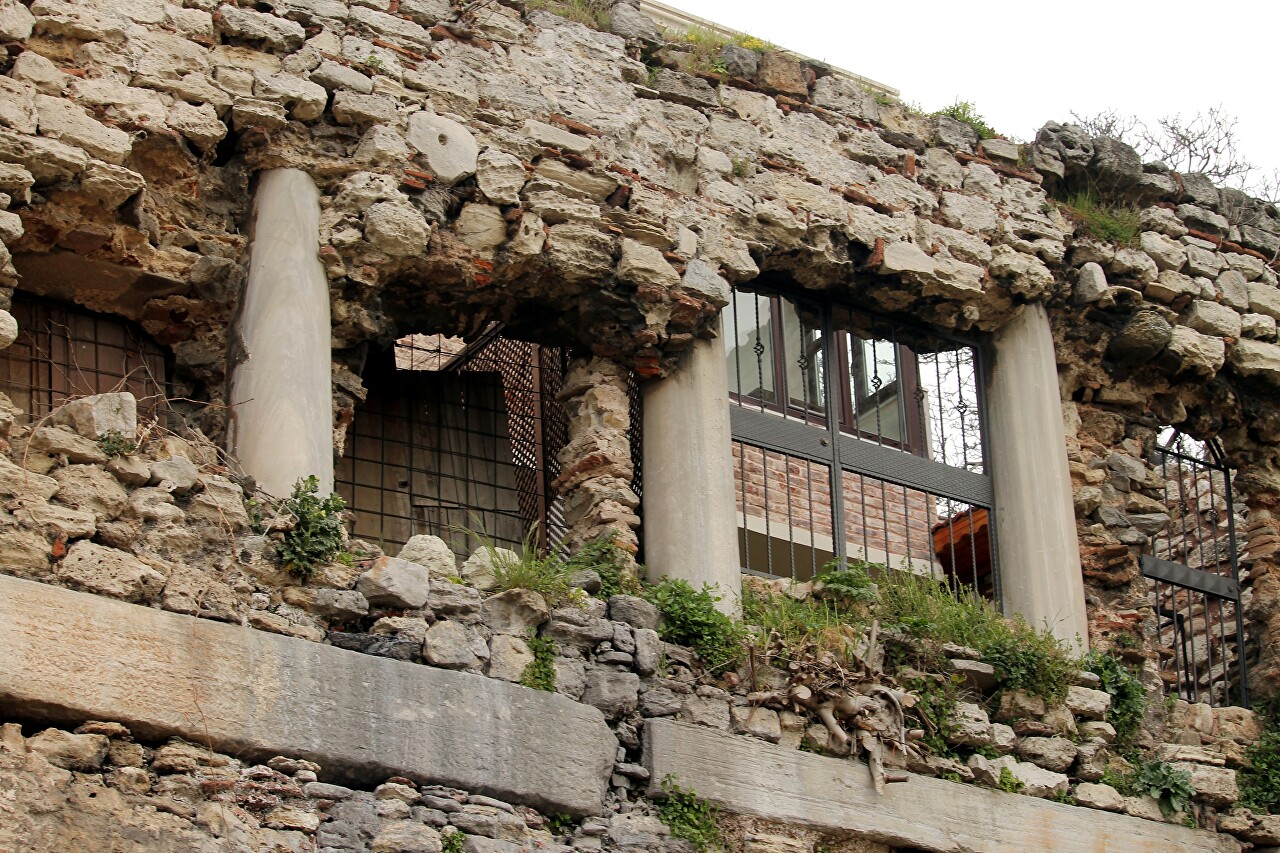 As you can see, later the columns were laid with stone, forming a solid wall, but time has them reopened. 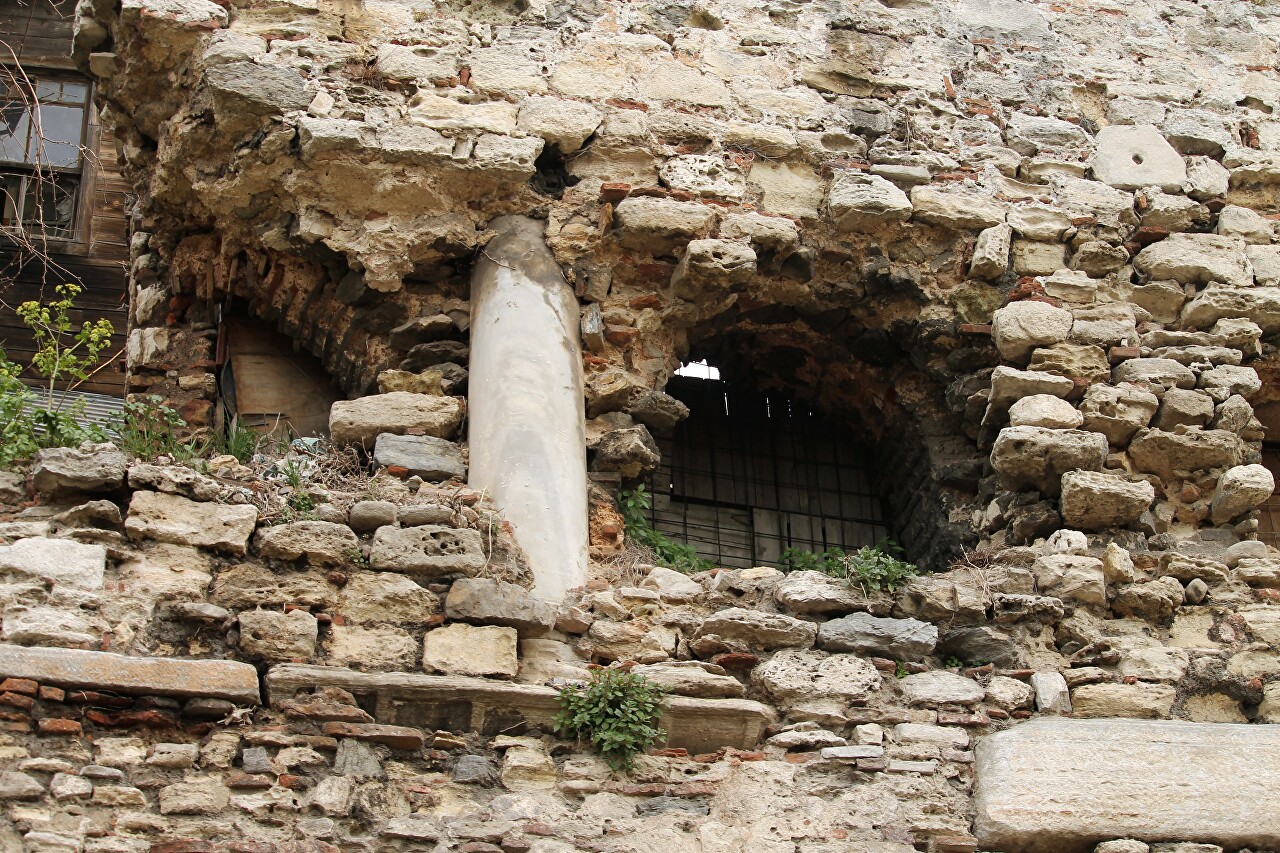 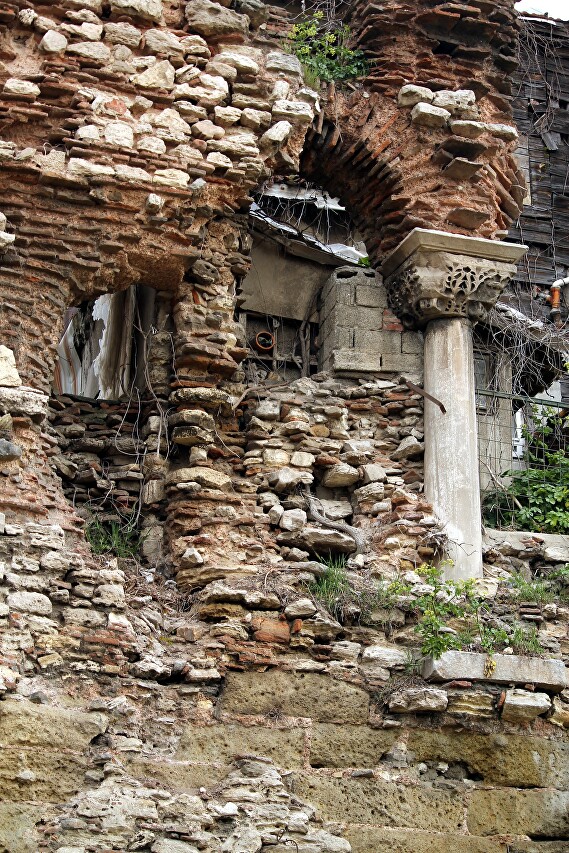 Most of the capitals with Byzantine floral ornaments are now on display in the Archaeological Museum, but there is still something left. 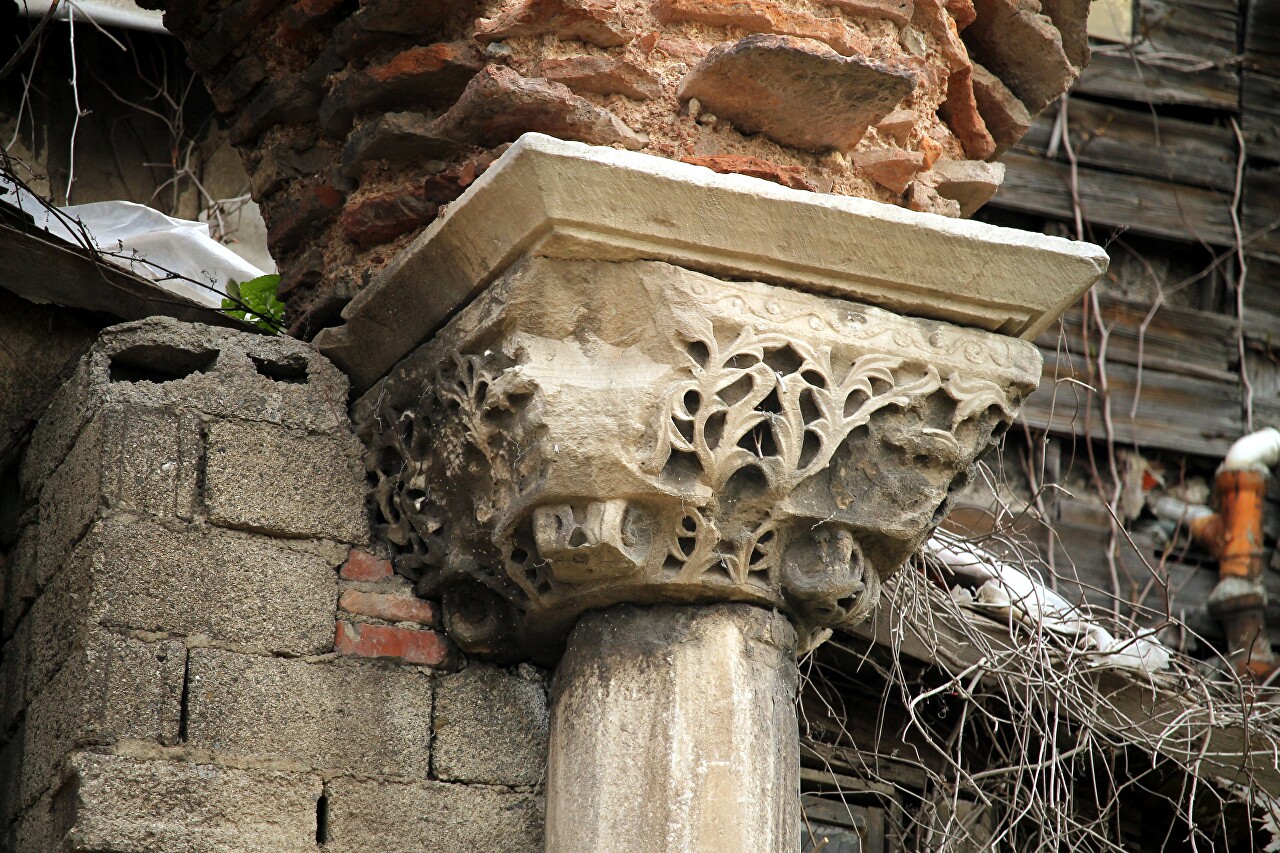 On the ruins of the Palace, you can sometimes see wooden buildings of the end of the Ottoman Empire, partially inhabited, partially abandoned. 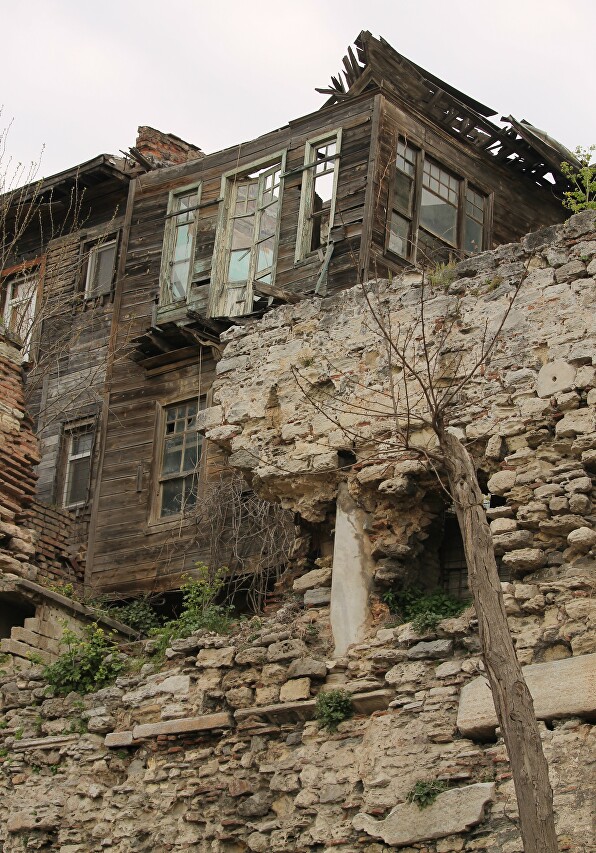 A peeling sign says that picnics are not allowed near the walls. 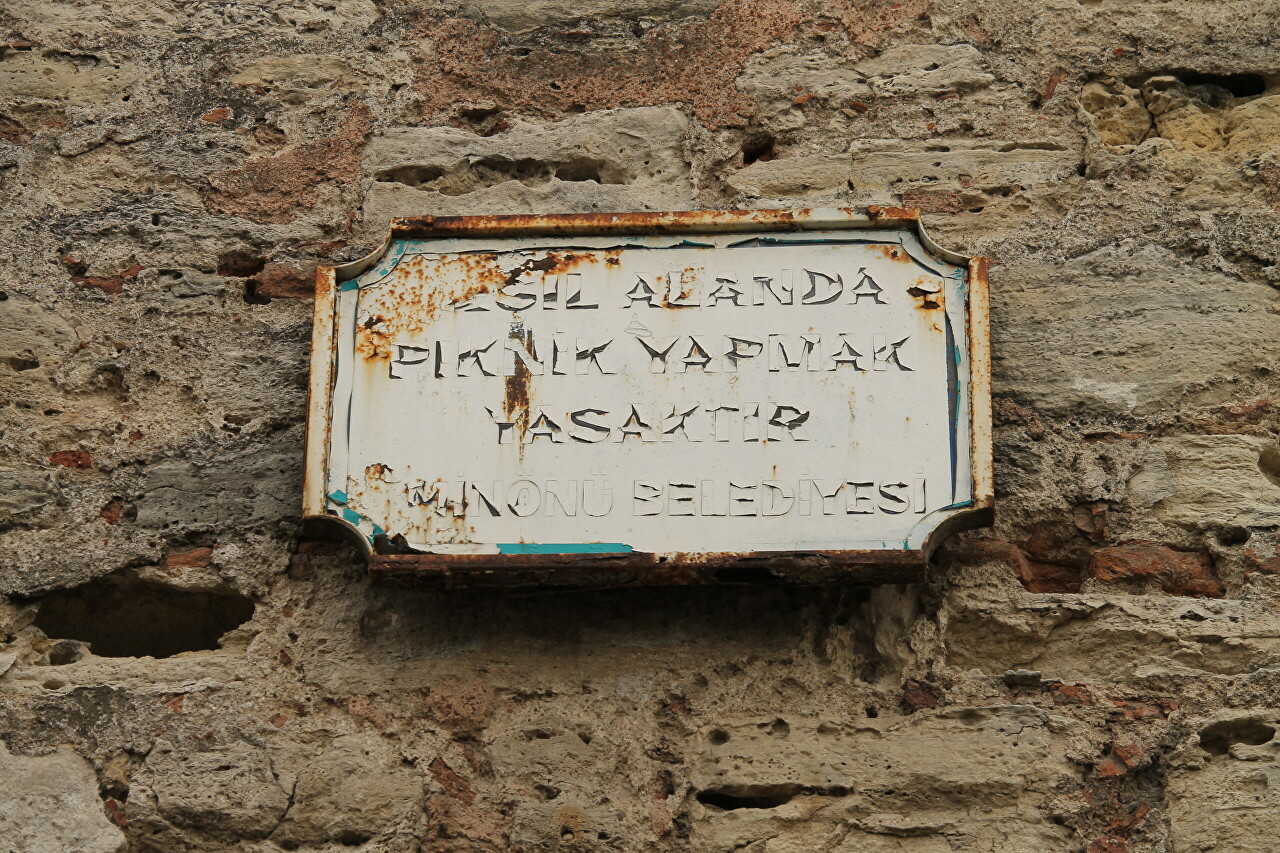 In front of the ruins there is a landscaped area that was built recently. The white obelisk was not a monument, but an information column. 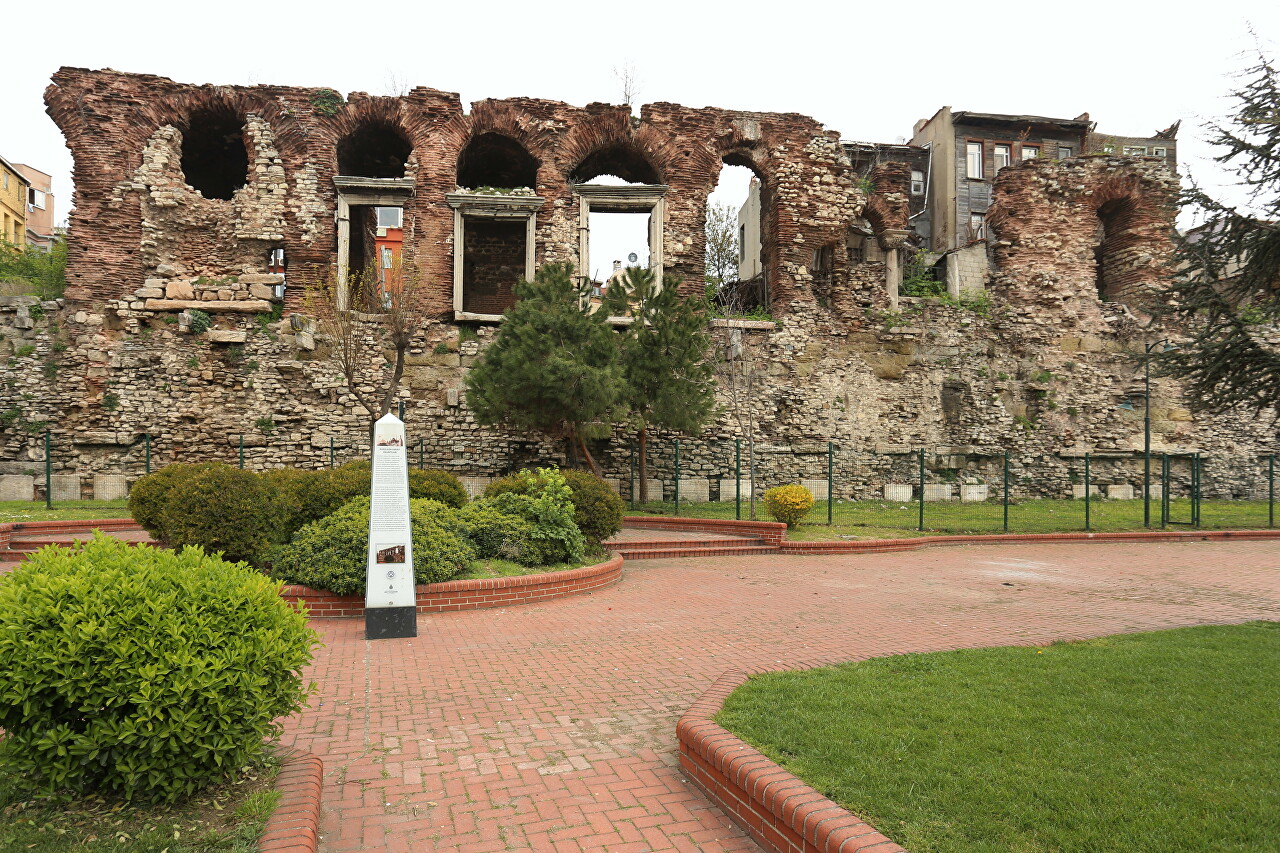